Los Angeles– The Staples Center in DTLA erupted with 16,702 boxing fans who experienced a modern-day classic as Texan southpaw Errol “The Truth” Spence and rugged two-time world champion Shawn “Showtime” Porter left blood, sweat and tears in the ring to deliver a Fight of the Year candidate and cement another tremendous fight at the renowned venue.

Though most boxing analyst and fans underestimated Porter (26-0, 21 KOs) since the fight was announced, the constantly labeled “weakest champion” at welterweight gave Spence (30-3-1, 17 KOs) the hardest fight of his career making him fail on his promise to knock him out cold. Regardless of Porter’s non-stop pressure and overwhelming tactics, Spence maintained his composure and came out on top to become unified welterweight champion by adding the WBC world title to his collection.

Porter  came in the first round bouncing on his feet and commencing the action but failing to land anything of significance early on with the round coming and going with Porter’s signature wild punches and cliches making an appearance. In the following early rounds, “Showtime” walked Spence backwards and capitalized on his stamina and effective aggressiveness to overwhelm “The Truth” who grinned at Porter with his back against the ropes.

The welterweights traded heavy leather in the middle of the ring causing the fans in the arena to roar in excitement as Spence attacked Porter to the body with left and right hooks. Not shying away, Porter responded by switching Spence into the ropes and taking his turn to land massive punches.

The middle rounds continued with Porter mimicking the Energizer Bunny as Spence dug deep for answers but couldn’t respond. Though Spence had his moments landing shots which momentarily stopped Porter from coming forward, they were immediately overshadowed by more efficient pressure from the Ohio fighter who turned southpaw and then back to orthodox as Spence landed bombs.

Spence seemed to wake up in the late rounds, causing Porter to stumble with one of his powerful jabs. Through Spence’s success, Porter kept coming forward like a sock ‘em rock ‘em robot who didn’t seem to run out of battery. In the 10th round, Porter came forward as if not to respect Spence’s power, which proved to be a mistake in the following round as Spence floored him with a beautifully executed left hook.

With Porter hitting the canvas in the 11th, many wondered if Porter would suffer the safe fate Kell Brook did against Spence back in 2017. Though Porter survived and got motivated to continue the toe-to-toe action to even out the round, Spence threw everything with intentions to win by knockout as the crowd chanted from the stands on their feet.

After 12 rounds of Fight of the Year contender action, Spence earned the split-decision with judges scoring the bout 116-111×2 in his favor and 115-112 for Porter.

Post-fight, former welterweight champion Danny “Swift” Garcia stepped in the ring to call out Spence for another shot at becoming champion, though Spence expressed interest in Manny Pacquiao.

At the post-fight press conference, Spence thanked his team and the fans and commended Porter on his performance.

“It feels good to win. This is a lifetime dream. It shows hard work pays off,” Spence said. “Thanks, Shawn Porter, my whole team and all my Texas people for coming out. Shawn Porter is a rough and awkward fighter. I didn’t get off what I wanted to. He’s a true champion. He made it tough.”

Porter’s team joined the media in the presser and poked fun at Spence’s swollen face claiming he had lost the fight. Porter however, clarified he’d never say he was robbed of a victory.

“He’s a strong kid,” Porter said. We both came in to do the job, I think I had a little more than what he expected, but he handled it. Congratulations to him and his team. We’re proud of what we did.”

In the co-main event Mexican American fighter David “Bandera Roja” Benavidez made history once again becoming two-time super middleweight champion defeating Anthony “The Dog” Dirrell by way of ninth-round stoppage. Benavidez regained the WBC title he had never lost in the ring, but was stripped of due to recreational drug use.

In the early rounds, both super middleweights cautiously felt each other out with Benavidez taking the role of the aggressor as Dirrell walked backwards patiently awaiting an opening from the younger fighter. The fighter out of Flint, Michigan gained confidence pummeling away at “Red Flag” who had his back against the ropes but smiled instead of showing frustration.

Benavidez unleashed in the fifth round, catching Dirrell off-guard but failing to accurately land the follow-up punches which met with Dirrell’s glove as he enforced his defense. In the sixth round, Benavidez delivered a straight left which caused a deep cut on Dirrell’s right eyelid.

The cut changed the momentum of the fight with Benavidez effectively trapping Dirrell on the ropes landing bombs to further hurt the wound. Though Dirrell switched to the southpaw stance to attempt to avoid more punishment, Benavidez kept swinging with bad intentions.

In minute 1:39 of the ninth round, the ref stopped the fight a  sBenavidez stalked his prey into the ropes to regain the WBC Super Middleweight Champion and remain undefeated.

Post-fight, Benavidez radiated with pride of becoming champion once again, this time by beating another champion instead of a vacant title.

“This was one of the hardest fights I’ve had,” Benavidez said. “It was very tactical in the beginning, but I worked my jab the whole time. It wasn’t easy. I’m now the youngest two-time world champion, from Phoenix, Arizona. I’ve got a lot of respect for Anthony Dirrell, especially the way he fought tonight.”

Barrios had success early on listening to Virgil Hunter in his corner knocking the Russian southpaw down in the fourth round. The knockdown encouraged Akhmedov to keep his guard up and unleash his right hand on Barrios who quickly began to swell up.

Akhmedov efficiently cut off the ring as the Texan fighter ate hard counters throughout the middle rounds. Barrios suffered a cut under his left eye but kept coming forward like a Mexican warrior. Akhmedov also swelled up under his left eye, yet kept his momentum trading heavy artillery with Barrios.

After 12 back-and-forth rounds, Barrios scored another knockdown to earn him the victory with the judges scorecards favoring him 14-112, 115-111, and 116-111 to serve Akhmedov his first professional defeat.

“I knew this was going to be a war,” said Barrios. “He was getting dirty in there but the Mexican warrior in me was not going to let this opportunity pass me by. I dug deep and got the victory.”

The pay-per-view opener got the crowd going rowdy as Josesito “Riverside Rocky” Lopez salio como perro against John “The Gladiator” Molina Jr., dropping him in the first seconds of the first round. Though Molina managed to get up before the count was over, Lopez continued to press the action dropping Molina another two times in the initial round.

Molina (30-9, 24 KOs) spent the early rounds on the backfoot hesitant to engage but occasionally landing heavy leather on his own against the “Riverside Rocky” who didn’t prioritize head movement as he came forward. While the Covina native had some success trading in the middle of the ring, Lopez (37-8, 20 KOs) constantly appeared in control cornering him against the ropes unleashing further punishment.

Lopez slowed down in the middle rounds, but continued being the aggressor popping Molina’s head back with crisp jabs. Though Molina was in the worst end of the exchanges, he did not go down again until the seventh round with a one-two from Lopez. Thirty-eight seconds into the eighth round, the referee decided he had seen enough and put an end to the bout resulting in a knockout victory for Lopez.

“We both carry power in our hands so it wasn’t a surprise someone went down,” said Lopez. “It easily could have happened to me with the power he has. I was able to catch him early, find openings and get the finish.” 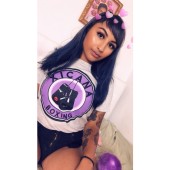 AND THE NEW: Saul “Canelo” Alvarez middleweight champion once again